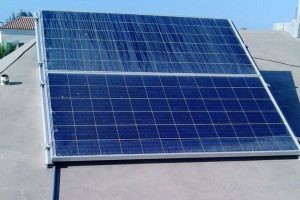 The town’s power is currently provided by a diesel generator for five hours in the morning and five to six hours in the evening. As a result, the hotel also has a generator from when it first opened several years ago to provide backup power when needed. However, the hotel’s owners have been pushing for 24/7 power from the national grid provider (CFE) as well as a renewable energy microgrid with the support of the Baja California Sur government, but these are long-term initiatives that haven’t materialized yet. That said, CFE has promised the grid is being brought north to San Juanico within the next year. In the meantime, the hotel has installed rooftop solar PV and batteries to power their office full-time and they plan to expand their on-site renewables as the hotel grows based on the energy audit they conducted with STOKE to calculate loads for current and future demand. As part of the kelp research project starting in October, the hotel is looking into blue carbon offset projects (mangroves, kelp, seagrass) in Baja so they can offset their own emissions and offer travel offsets to guests to become carbon neutral.