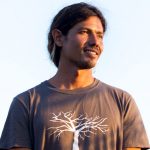 As the first surf school to set up shop in Nosara back in 1999, Safari Surf School (SSS) has stood the test of time and continues to not only be one of the best surf schools in Playa Guiones, but also a staple amongst the local community. The four-mile beach break in their backyard offers plenty for all experience levels, or more advanced surfers can try reef and pointbreaks within 20 minutes to the north and south.

Safari Surf School’s original HQ, the Casa Tucan Hotel and Restaurant, was actually one of the first members of the STOKE Surf program in 2012, but as they were working towards certification in 2013, the majority owners of the hotel decided to sell and Safari Surf School, unfortunately, had to leave their home. Rather than giving up on their dreams and their sustainability goals, the owners of SSS reached out to their clients (more like family)—who have been going to SSS to advance their surfing for generations—as potential investors to build a new sustainable hotel from the ground up. The Safari Surf ‘family’ then banded together and began the next chapter of their sustainable surf tourism business.

Now, a few years later, the new HQ for SSS is the first Leadership in Energy and Environmental Design (LEED) Platinum hotel in Costa Rica—Olas Verdes. Not only that, but the former chef and waitress of the Casa Tucan were given their own business at the hotel right next to the Safari office—an organic farm to table Tica-owned restaurant called El Manglar! Despite their challenges, Safari Surf persevered and connected a group of stakeholders who love Nosara to build a sustainable hotel, restaurant, and surf school all in one idyllic location on the edge of a wildlife refuge (five minutes from the surf).

Safari Surf School and Olas Verdes Hotel were certified together and conduct several initiatives that complement each other. View Olas Verdes’ profile for the complete picture.

As a LEED Platinum hotel, Safari Surf School’s HQ has many unique sustainable design and construction features, the coolest of which is probably the recycled glass mosaic of a sunset at Playa Guiones on their wall. Olas Verdes and Safari Surf worked with the ladies at the Nosara Recycling Center and two local artists to determine which colors they wanted to use and what brands of alcohol matched their color palette. After saving 55 gallon drums of each color for several months at a time for each mural, the local artists were able to delicately build the mosaic of Playa Guiones over the course of one month. Their office also features an upcycled surfboard art piece by Erik Kuzbard and their deck is made with recycled plastic made in Costa Rica.

In order to provide a well-rounded experience for their guests, Safari Surf has tried to maintain a consistent regiment of trainings for their staff on various subjects. A local biologist, Roberto Quiros, trained the surf instructors and hotel staff on environmental interpretation about the flora and fauna of the neighboring Ostional Wildlife Refuge, which separates the property from Playa Guiones by 200 meters. The staff have also been trained by STOKE about sustainable tourism as well as LEED certification and what it means for the building. Poderco, the solar installer, trained Safari’s office staff on how to use The Energy Detective (TED) energy meter software to monitor their energy use and how it correlates with the rooftop solar production.

Safari Surf School has some of the best surf instructors in Nosara—most of which have been with Safari since the beginning in 1999 and have become legends in the community. Besides being International Surfing Association (ISA) Level 2 or Level 1 instructors, most of them are certified for advanced surf rescue procedures and lifeguard training. Safari Surf and Olas Verdes even hosts ISA and International Lifesaving Federation (ILS) surf rescue trainings in the off season for any and all instructors in Costa Rica and even Central America.

In addition to paying for their staff’s English classes, Safari Surf supports local education initiatives primarily through their Pack for a Purpose partnership, which encourages guests to bring school supplies and clothes in their luggage to donate to the local Serapio Lopez elementary school. Each year, the surf school does different projects outside of Pack for a Purpose based on the school’s needs—including replacing a roof, making a mural, and painting classroom walls in 2017.

Safari Surf has hosted a benefit concert for Nosara Community Watch at Olas Verdes for the past couple years as a way to kickoff the season and support security and safety initiatives in the community as tourism grows. Funds are used to keep up with infrastructure needs and planning (crime, security cameras, fire, emergency and natural disaster planning). Acts like Donavon Frankenreiter and G-Love have headlined the show along with local favorites for security cameras, staffing, and emergency preparedness and planning for the community.

While supporting widespread relief efforts after Tropical Storm Nate devastated homes and businesses near the Nosara River last October, Olas Verdes and Safari Surf assessed the damage and decided to donate 4% of the hotel’s sales for October, November, and December as well as raise over $10,000 via GoFundMe to rebuild their employee’s homes that were swept away or destroyed in the flooding.

We know that surfers would never align their business with modern day slavery, but the awful truth is that a product or service within a business’ supply chain may indirectly or directly support such acts of exploitation. There are many factors that influence how and why this underground industry still exists, but the surf tourism community can do its part to help eliminate it on a global scale. Safari Surf used the STOKE Transparency in Supply Chain Letter and Questionnaire tools to engage their suppliers at the start of the 2017/18 season and hopes to create an alliance within their supply web to raise awareness and choose alternative vendors who don’t cooperate.

Safari Surf has proudly hired locals and paid fair wages (30% over minimum wage on average) for nearly two decades now and helped those residents build their skill sets to be able to manage the business (except for the expat retiree, Sunset Cliffs legend, and Safari blogger, Peter). Safari has always had at least one or two female instructors, but with the resurrection of the Women’s Surf Adventures program and an awareness campaign on LGBTQ friendly surf camps, the surf school hopes to promote greater diversity within the space.

Safari Surf believes in preserving the cultural heritage of Nosara and supporting those sites which make it special. In 2017, they donated the floor tiles and labor for reflooring the Las Delicias Salón Comunal (community hall) and two years ago they donated funds to the local catholic church to rebuild after the 2012 earthquake. Similar stories of in-kind or ad hoc contributions have been in Safari’s DNA over the years, but they’re looking to find a more consistent way to contribute to ongoing needs in this part of the community.

Although the instructors have had some informal knowledge about the environment they worked in, Safari Surf stepped it up at the start of the 2017/18 season by having a local biologist and tour guide train the surf instructors and hotel staff on how to provide interpretation about the Ostional Wildlife Refuge. Now, when going out to the beach for your lesson or share a session, the surf instructors can talk about the ecosystem benefits of mangroves, the Howler Monkeys, and other flora and fauna. Guests are also encouraged to tour the Nosara Refuge for Wildlife as part of the $50 donation included in their package.

Besides saving 90% of the trees on the property and using native landscaping exclusively for the grounds to blend seamlessly with the wildlife refuge, Safari Surf leverages their business to contribute to local biodiversity projects. For each guest who books a package with the surf school, $50 is donated to the Nosara Refuge for Wildlife which has raised $29,120 since the program started in November 2015. The Refuge primarily takes care of injured Howler Monkeys who get shocked on the uninsulated power lines, which have grown with the influx of tourism, so Safari Surf added this protection to the power lines on their property. In addition to being a sponsor, Safari volunteers and coordinates volunteers for the Costas Verdes local reforestation initiative which plants trees on Playa Guiones.

With the Ostional Wildlife Refuge as a 200 meter barrier between the surf and the hotels and businesses in Playa Guiones, Safari Surf recognizes how privileged they are to be in a community that prioritizes coastal conservation. Their staff participate in monthly beach cleanups with Olas Verdes in different parts of the coastline as needed for the Blue Flag program (an eco friendly beaches designation). Beyond encouraging guests to attend, data from what types of trash and how much picked up is recorded in a spreadsheet by Olas Verdes and reported to the local Blue Flag coordinator.

For most surf schools, it’s hard not to source beginner friendly boards from China, which Safari still resorts to for some of its durable epoxy board needs, but the surf school took a strong step in the right direction two years ago. In partnership with Firewire, they sourced 100% Timbertek boards (verified Eco Boards) for lessons, premium rentals, and for their instructors’ personal quivers. Boards that have been repaired locally but then are no longer fit for use, are donated to local groms where appropriate.

With nearly 30% of the property’s energy demand met with rooftop solar, battery storage, and solar hot water (plus Costa Rica’s nearly carbon free grid), Safari Surf focused on tracking their scope three emissions (guest travel). All in-country and international flights along with in-country shuttles to Nosara are recorded and the associated emissions are calculated in the STOKE carbon footprint tool, which resulted in 16.45 tons for the 2016/17 season. Carbon offsets were purchased through the Costa Rican organization, FONAFIFO, which pays local farmers to sustainably manage their forest and plant trees to sequester carbon throughout the country. For this season, Safari is tracking staff travel as well and they are going to offer voluntary offsets to guests for their international flights. 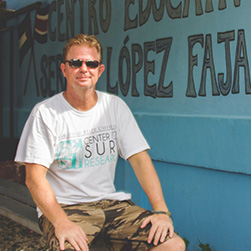 Commitment to a Sustainable Future

We were one of the first members to join STOKE at our old hotel in 2012, and were close to certification when majority owners of the property changed hands in 2013. At that point, I set out to create a more sustainable HQ so I brought together like-minded partners to build the ideal surf hotel. A few years later, Olas Verdes opened its doors and we transitioned our management practices to this state-of-the-art sustainable hotel so we could be the first STOKE Certified surf school and to my knowledge, the world’s first surf school program to be certified sustainable. Today, Safari Surf is honored to hold this prestigious title and I’m forever grateful to my amazing partners and staff for their hard work and dedication to making this dream come true!

That said, we know there is no finish line and this is only the beginning. Going forward, here is what we’d like to achieve:

Muchas gracias for taking the time to get to know us and we can’t wait to share some waves with you soon.