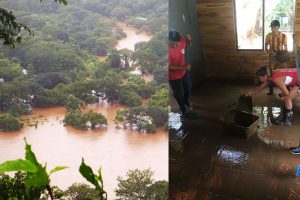 In addition to hosting the Nosara Community Watch concert benefit at the hotel with Safari Surf School, the two businesses supported widespread relief efforts after Tropical Storm Nate devastated homes and businesses near the Nosara River last October. Olas Verdes and Safari Surf assessed the damage and decided to donate 4% of the hotel’s sales for October, November, and December as well as raise over $10,000 via GoFundMe to rebuild their employee’s homes that were swept away or destroyed in the flooding. Olas Verdes has also attended a conference with leading scientists exploring the research behind Blue Zone communities and educating guests about Nosara as a Blue Zone (hotspot for centenarians: i.e. 100-year old life expectancy).